AMNESTY INTERNATIONAL AND HUMAN RIGHTS WATCH REPORT A MASSACRE BY ERITREAN MILITARIES WITH HUNDREDS OF VICTIMS IN AXUM, ETHIOPIA. HOWEVER, THE FINDINGS ARE MISSING, IN A REGION FROM WHICH MANY MIGRANTS ARRIVE TO ITALY 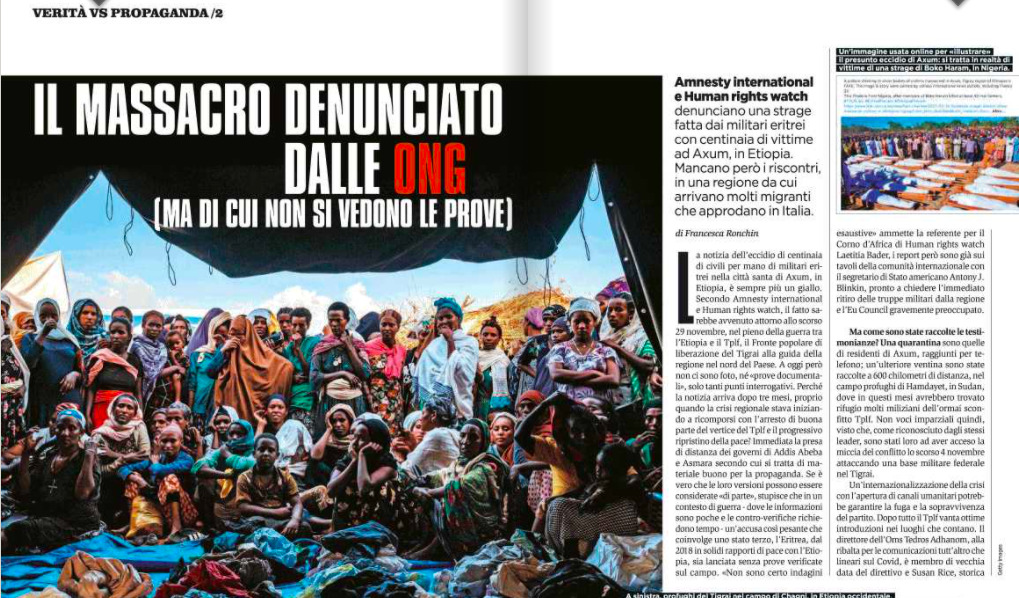 News of the massacre of hundreds of civilians by Eritrean soldiers in the holy city of Axum, in Ethiopia, is increasingly a mystery. According to Amnesty International and Human Rights Watch, the incident took place around November 29th, in the midst of the war between Ethiopia and the Tplf, the Tigray People’s Liberation Front at the helm of the homonym region in the north of the country. To date, however, there are no photos, nor strong  evidence, only many question marks. Why does this news come only after 3 months, just when the regional crisis was starting to recompose its scars with the arrest of a large part of the Tplf and the gradual restoration of peace? Addis Ababa and Asmara reject all the accusations saying is good material for propaganda.

If Governments’ versions could easily be considered “biased”, it is quite surprising that in a context of war – where information is scarce and counterchecks take time – such a heavy accusation which also involves a third state, Eritrea, since 2018 in solid peace relations with Ethiopia, comes before any evidence could be verified on the ground.

“These are certainly not exhaustive investigations” admits the referent for the Horn of Africa of Human rights watch Laetitia Bader. The reports though are already on the tables of the international community with the American Secretary of State Antony J. Blinkin ready to ask for immediate withdrawal of military troops from the region and the EU Council deeply concerned.

But how were the testimonies collected? About forty are some Axum residents, reached by telephone then twenty were collected 600 kilometers far from there, in the refugee camp of Hamdayet, in Sudan, where in recent months many militiamen of the Tplf have found refuge. Not necessarily impartial voices then, given that as recognized by the leaders themselves, it was them who lit the fuse of the conflict last November 4 by attacking a federal military base stationed in the Tigray region.

An internationalization of the crisis with the opening of humanitarian corridors could guarantee the escape and survival of the party. After all, the TPLF boasts excellent introductions to those places that matter. The director of the World Health Organization Tedros Adhanom, in the limelight for communications far from linear on Covid, is a long-time member of the board and Susan Rice, historical friend of the former premier Meles Zenawi, according to some well informed is among the gray eminences of US foreign policy.

What verifications have been made to exclude any conflicts of interest? This information is not known. It is also difficult to understand how it is possible that in a city of 40,000 inhabitants there is not a photo of the alleged massacre. “There was no electricity, the cell phones were flat,” explains to Panorama Fisseha Tekle, the Amnesty researcher in Nairobi who edited the report. During the war, the region suffered several blackouts, but some batteries must have been charged if in the Human Rights Watch report a photo of November 30 immortalizes a lady being treated at the hospital. “The military checked the phones and had the photos deleted,” they explain. But weren’t the cellphones off?

Another complication is introduced by Human Rights Watch experts, according to them many bodies have not been collected because they were devoured by hyenas. Is it possible that wild animals are capable to make bones and clothes disappear or that their intrusion can obstruct the documentation of a massacre?

The mystery deepens when we come across the films shot by Ethiopian TV on November 30 at the church of St. Mary of Sion. A day of celebration that every year gathers the Orthodox community with thousands of pilgrims. The streets are perhaps less crowded than usual but the atmoshpere is peaceful. “The government forced people to lie,” explains Laetita Bader. The American Associated Press reports the killing of 800 people and the looting of the precious Ark of the Covenant. All falsehoods according to Bahtawi Gebremeskel, priest of St. Mary of Zion who launches an appeal: “If you have any doubts, call us, we are here”.

It is also strange that the massacre committed by the Tplf in Mai Kadra against 750 civilians was not followed by such vocal denunciations. Human Rights Watch even chooses not to cover it. And rewinding the film to the 27 years when the Tplf was in power in Ethiopia, nothing has ever been said about the non observance of the borders with Eritrea. “We only deal with human rights,” replies Tekle, “not with border issues.”

Yet it is a fact that the resulting cold war like situation that ended only in 2018 with the peace agreement between Nobel laureate Abiy Ahmed and Eritrean President Isaias Afewerki – never accepted by the TPLF – has transformed the entire region into the main starting point of migratory flows (towards Italy and Europe). Often, however, with thousands of Ethiopians from Tigray mixed with the more than 150 thousand “Eritrean refugees” arrived to Italy since 2013 thanks to somatic and linguistic similarities. All with the UNHCR, the UN body that deals with refugees, ever noticing there was something wrong. Now chaos spreads online and there are news sites that report about the alleged victims of Axum by using pictures of Boko Haram victims in Nigeria. A situation that certainly does not help the work of those – the NGOs themselves – with these reports inspire the choices of Western governments on which countries consider “unsafe” and which migrants consider entitled to asylum. It’s a matter that should be treated carefully. That’s why a question arises, about what’s really at stake here.

33830cookie-checkAMNESTY INTERNATIONAL AND HUMAN RIGHTS WATCH REPORT A MASSACRE BY ERITREAN MILITARIES WITH HUNDREDS OF VICTIMS IN AXUM, ETHIOPIA. HOWEVER, THE FINDINGS ARE MISSING, IN A REGION FROM WHICH MANY MIGRANTS ARRIVE TO ITALYyes