THE IMPORTANCE OF BEING CALLED TEDROS 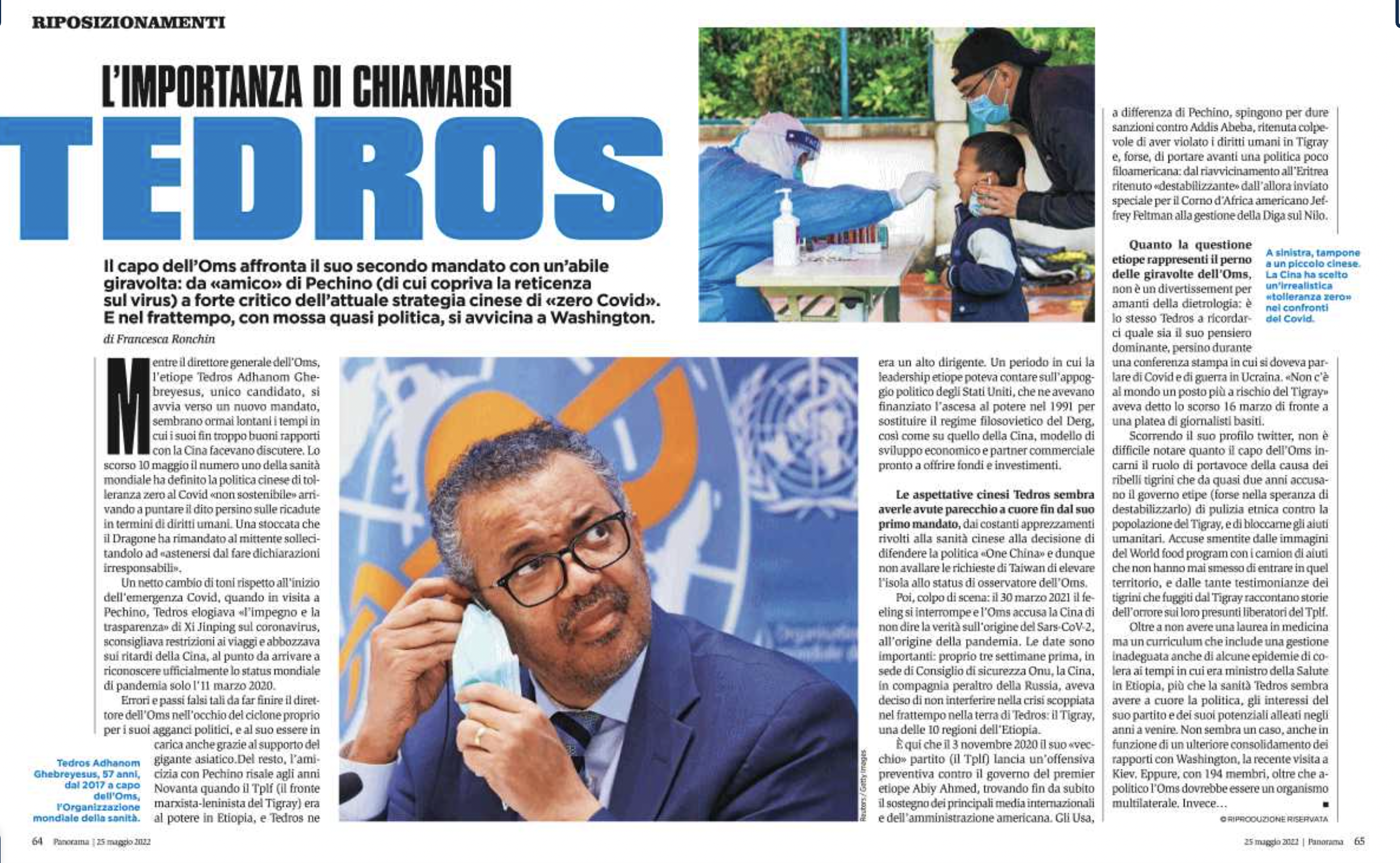 The WHO Head faces his second term with a skilled twist: from being a “former friend” of Beijing (whose lack of transparency on Covid has been covered for months) he has recently become a strong critic of the current Chinese strategy of “zero Covid”. And in the meantime, with a political move, he is getting closer to Washington.While the WHO Director General, the Ethiopian Tedros Adhanom Ghebreyesus, only candidate, is facing a new mandate, the times in which his relations with China were friendly, seem a far memory. On May 10th, the number one of the global health has defined the Chinese zero tolerance policy for Covid as “unsustainable”, blaming them even for the repercussions in terms of human rights. A critical stand the Dragon has answered to right away, urging Tedros to “refrain from making irresponsible declarations”.

A clear change of tones compared to the beginning of the Covid emergency, when on a visit to Beijing, Tedros praised Xi Jinping’s “commitment and transparency” on the coronavirus, advised against travel restrictions and sketched on China’s delays, to the point of get to recognize the world status of a pandemic only on 11 March 2020. A long list of mistakes and missteps that have put the WHO director in the eye of the storm for his political connections, and to the possibility he is in office thanks to the support of the Asian giant.Moreover, the friendship with Beijing dates back to the 90s when the TPLF (the Marxist-Leninist front of Tigray) was in power in Ethiopia, and Tedros was a senior leader. A period in which the Ethiopian leadership could count on the political support of the United States, which had financed its rise to power in 1991 to replace the pro-Soviet regime of the Derg, as well as on that of China, a model of economic development and trading partner. ready to offer funds and investments. As for the cChinese expectations, Tedros seems to have had them very close to his heart since his first mandate, from the constant appreciation addressed to Chinese health care to the decision to defend the “One China” policy and therefore not endorse Taiwan’s requests to elevate the island to observer status at the WHO.

Then, suddenly, this story has a twist: on March 30, 2021, the friendship between Tedros and Beijing ends and the WHO start accusing China of not being transparent on the origin of Sars-CoV-2 and the origin of the pandemic. The dates here are important: just three weeks earlier, in the UN Security Council, China, in the company of Russia, had decided not to interfere in the crisis that broke out in the meantime in the land of Tedros: Tigray, one of the 10 regions of ‘Ethiopia. It is here that on November 3, 2020, his “old” party (the TPLF) launches a preventive offensive against the government of Ethiopian Prime Minister Abiy Ahmed, immediately finding the support of the main international media and the American administration.The United States, unlike Beijing, are pushing for harsh sanctions against Addis Ababa, deemed guilty of violating human rights in Tigray and, perhaps, of pursuing a policy that is not very pro-American: from the rapprochement with Eritrea considered “destabilizing” by the then American special envoy for the Horn of Africa Jeffrey Feltman to the management of the Nile Dam. How much the Ethiopian issues represents the pivot of the WHO’s twists, it is not a divertissement for some lovers of conspiracy theories : it is Tedros himself who keeps reminding us what is his dominant thought, even during a press conference in which we was supposed to talk about Covid and war in Ukraine. “There is no place in the world more at risk than Tigray,” he said last March 16 in front of an audience of stunned journalists. After all, scrolling through his Twitter profile it is not difficult to see how much the WHO head still embodies the role of spokesperson for the cause of the rebels who for almost two years have accused the Ethiopian government (perhaps in the hope of destabilizing it) of ethnic cleansing against the population of Tigray, and to block humanitarian aid.

Accusations denied by the images of the World Food Program trucks that never stopped entering Tigray (actually they stopped getting out from the region as they have been confiscated by the rebels) and by the countless testimonies of Tigrayans who fled the region and who are now telling real horror stories about their alleged TPLF liberators as well documented by Ann Fitz-Gerald, Director of the Balsillie School of International Affairs in Waterloo, in her last dossier. In addition to not having a medical degree but a curriculum that includes inadequate management of some past cholera epidemics when he was Minister of Health in Ethiopia back in 2006, not to mention a global Covid-19 death toll that has surpassed 6 million victims, more than global health Tedros seems to have at heart politics, the interests of his “old” party and its potential allies in the years to come.

It does not seem a coincidence, also in order of consolidating the relations with Washington, the recent visit to Kiev. Yet, with 194 members, in addition to being a-political, the WHO should be a multilateral body. Instead…